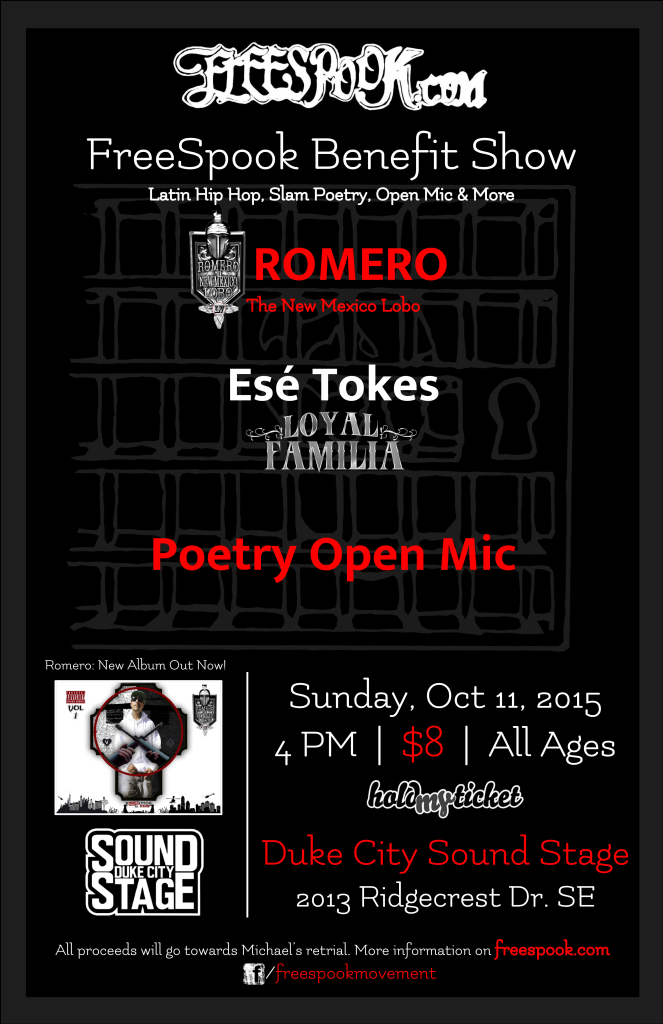 The FreeSpook Benefit Show was held on Sunday, October 11th, 2015, at Duke City Sound Stage. We had many performances and talents showcased, ranging from slam poetry, hip hop, personal statements of solidarity, and more.

Thank you everyone for coming out!

The following message, written by Michael, was read at the Benefit Show.

This little get together is part of a fundraiser for my legal stuff. These words are being read on behalf of Michael Armendariz and there are flyers here which explain his situation.

In 2002, I was just a young homie who would spit flows. I loved the music but didn’t especially care for the spotlight. The course of my life took a drastic turn and a twisted up version of my story was put on the evening news. I’m actually a good guy but I’ve been called “one of the worst of the worst” more than once. I didn’t like this so I got right within myself, developed my writing skills, and took my story into my hands.

Wouldn’t it be nice if we could have faith in the system? The wheels of justice don’t turn for some people and the proper channels have never worked for me. I truly have respect for life so I won’t be nonchalant about a person who lost his life but even police are supposed to carry themselves to a certain standard. Wearing a badge or having a certain job doesn’t mean you can get off work, get drunk, attack somebody without justification, beat them with help from your friends, and then try to strangle someone to death while your buddies kick them. I’m not judging that guy because that’s what happened, but that is what happened. With all due respect to everybody involved, I swear to you that person’s life was not stolen. The debt I owe society is truth and until the truth of my story is acknowledged, society has been robbed.

Some people are used to being kicked when they’re down. An easy solution to that is to always stay on your toes but we all fall one way or another. The system knocks us down when justice is denied, tragedies inflicted, and opportunities withheld. We all understand it’s a cold world and when we’re down we often make ourselves easier targets by withdrawing into our individual groups. I know this fundraiser is a long shot, it’s risky, and my people are vulnerable but the old way isn’t working so I have to try something new. The rotation don’t ever stop and we all know that, but you can take this opportunity not to kick me when I’m down.

Much love to my sixteen dead homies and I hope you take some time to think about all the people you lost in the struggle and then think about all the people still here who need you to be your best for them. I know it can be difficult, even dangerous, and worst of all boring. It sucks but if you keep the faith, one day, we’ll shine together. Someone once told me to always fight in the faith and never fight in the feeling. And that, my friends, is how you walk on water. Have a firme night, thank you all for hearing me, real recognize real and you lookin’ familiar.