Free Michael Armendariz And Justice for All 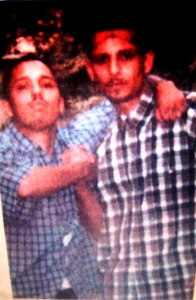 Fifteen years ago I got Life in prison for the consequences of my choice to save a life. As Nestor Chavez and I left a bar with our girlfriends we encountered a group of drunk people who attacked us illegally and without justification. This group never identified themselves as law enforcement, were in plain clothes, and off duty but they did meet us with excessive force which was intended to cause death and resulted in permanent scars upon Nestor. I was even handed a gun because of a witness’ fear for Nestor’s life (evidence of that was suppressed in my first trial). Upon our retreat yet another attack forced me to defend myself. There is ample evidence proving these circumstances surrounded the shooting death of deputy Damacio Montaño. My original trial was contaminated by a prejudicial investigation among other improprieties (many of which came to light after my original trial). Represented by an ineffective, negligent, and possibly criminal Public Defender, I was tried and convicted of First Degree Murder. This obviously wasn’t a conspiracy against me but was an orchestrated cover up to honor the memory of an officer who died (in what some considered) the line of duty.

I don’t want to avoid accountability for this self defense shooting (though it was self defense). I believe support for my appeal has come because a First Degree Murder conviction sends a dangerous message in this case. The message is that people who enforce our laws can act like criminals. Prior to my charges I was an ex-offender living in an environment plagued by hopelessness and addiction. Despite my mistakes and surroundings I was an active father, had completed two years of parole, and was a college student. I was making many sincere and positive changes in my life. There are many people like me who have been on the wrong side of the system but are changing their lives for the better. This change can occur with the help of social consciousness, responsibility, and accountability. People given power to enforce our laws must have as much accountability as any other citizen or they could commit crimes and then manipulate any story to suit their purposes. If you believe in the rule of law then quite possibly my situation helps to make us all less safe. And people like me don’t stand a chance under these circumstances. That’s why I’ve needed support to get justice.

Help me get a new trial and support New Mexico Hip Hop.

I chose to save my friend’s life but I didn’t have time to think about it. For that matter, I wasn’t thinking about saving myself either. I only reacted. Now that fifteen years of my life has been spent in prison, I hope this court will consider the unfair nature of my situation. Because of what has already happened my friends and a growing coalition of social justice advocates are paying close attention to this case. We are just people without much money or any powerful connections. We do not support crime nor are we against the police. All we want is a system with the strength and the courage to let justice work for all of us.